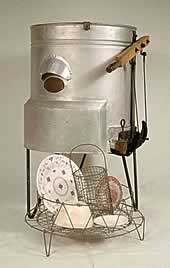 The earliest attempt to use gas to provide domestic hot water, in the 1850s, used gas jets to directly heat a metal bath and the water inside. It is not clear whether the gas was supposed to be turned off before getting in the bath! Later in the 19th century, gas geysers were produced, which were mounted directly above the sink or bath. These were quite dangerous as they had no flues. In the 20th century, flued gas water heaters with automatic ignition from a pilot light became common.