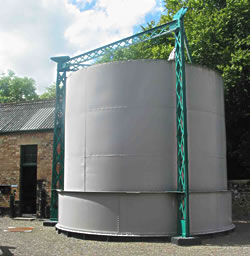 Originally, gas was only used for lighting for a few hours at the start and end of each day so it was soon realised that it would be more efficient to make gas over a longer period and store it. The first gas holders just consisted of a “bell” floating in a tank of water. Calibration marks on the floating bell showed how much gas was being made or used, so these devices became – and are sometimes still – wrongly called “gasometers”.

Later in the 19th century, gas holders became larger and more sophisticated, with telescopic sections. In the 20th century, various waterless designs, for example using a piston sealed with tar, were introduced from Europe. Many gas holders remain in use today in Britain, being filled at night and emptied during the day in the winter.

Early gas pipes were generally made of cast iron with socket and spigot joints which were packed with hemp and sealed with molten lead. Today, gas pipes are made from polyethylene or, for higher pressures, welded steel.