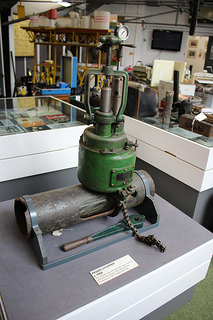 The use of gas in industry for purposes other than lighting was slow to take off but gas flames were used from the early 19th century in textile mills for singeing thread and finishing fabric. In jewellery and tinsmiths’ workshops, the convenience of gas flames for soldering was appreciated. Gas was also used in glass manufacture from the 1870s. Gas engines, the first successful internal combustion engines, were developed around 1860 and were popular for many industrial applications as they were smaller and more flexible than steam engines. By around 1900, many gas engines were being used to generate electricity in factories and for public and tramway supplies.

A visit to the hairdressers in the 1930s might result in an encounter with a gas heated hairdryer and curling tongs!

When natural gas was introduced to Britain in the 1960s, its reduced price and cleanliness compared with manufactured gas, made it an attractive choice for many industries.